Getting to grips on the difference between energy, heat and temperature.

Stefan asks:  Grant, Thank you for your contributions, we find that many people working in the field do not understand the basics, for example energy, heat and temperature. When I even mention latent heat the wheels come off. Perhaps this would be of value in getting some basic understanding in place. Thanks.

Hi Stefan, yes what you say is correct. Let us then go back to basics – starting with temperature.

The temperature of a body is how hot or how cold the body is; it is measured with a thermometer. In South Africa it is typically indicated in degrees Celsius (°C).

Temperature is a measure of the heat intensity of a body. It is a function of the internal kinetic energy and as such is an index of the average velocity of the molecules. Thus the colder a body is, the less the movement of the molecules and the lower the internal energy.

Scientists have calculated the point at which there will be no movement of molecules and thus no internal energy. This point is called the absolute zero temperature (-273 oC). The unit of absolute temperature is the Kelvin (K). Its symbol is T.

The customary temperature (t) is given in degrees Celsius (oC).

When expressing a temperature interval or a temperature difference, both units can be used (K or oC). Note that when K is used, the o sign is not used.

(The energy flowing is called heat.)

The conversion of customary temperature to absolute temperature and vice versa are as follows:

Heat is a form of energy. It can be made to do work. An example is the steam engine where the heat energy produces steam, which can be used to produce work; or in a petrol engine, heat is used to expand the fuel/air mixture, which pushes down the piston, which moves the car.

Any substance or body has internal energy due to the movement of molecules. The rate of movement depends on its temperature. When energy is transferred due to temperature difference, the energy is called heat.

Heat energy is given the symbol Q.

To indicate a rate of heat transfer, a dot is placed over the symbol.

Heat being a form of energy is also expressed in Joules (J) or kilojoules (kJ). Heat transfer is Joules per second, which equals Watts.

Let’s look at water being changed from ice to water and water to water vapour.

The best examples of these three phases are ice, water and water vapour (or steam).

To heat water a kettle must be switched on to provide the energy. Initially the water increases in temperature. Once it is boiling the temperature remains the same. It will only keep on boiling if the element remains switched on.

From this we can deduce that to heat the water, energy is required and to make the water boil, energy is also required.

Where does the energy go when the water is boiling because the temperature of the water does not increase?

“Heat, when added to or removed from a substance can either change the temperature of that substance or change its phase.”

The heat being added when the water is boiling is used to change the water to water vapour. The heat added does not increase the temperature and cannot be measured with a thermometer, therefore it is called latent (or hidden) heat.

To put this in a refrigeration context, this is the process used by an evaporator; heat is absorbed by the evaporator to boil off a refrigerant at a low temperature.

When water is heated from 20°C to 100°C, or cooled from 100°C to 20°C, the heat added or removed can be sensed or felt. This is sensible heat; when you put your finger in the water you can feel the water getting hotter or colder.

Heat is energy, so the unit for sensible heat is the same as for energy, i.e. the Joule.

Different substances require different amounts of heat to raise their temperature by a certain amount.

For instance, to increase the temperature of 1kg of water from 15°C to 16°C requires

To decrease the temperature of the substances the same amount of heat is required.

The specific heat capacity of some familiar substances are as follows:

When heat is added to water at 100°C at sea level it will boil and evaporate and change phase (water to water vapour). The heat added does not increase the temperature but changes the phase. It is thus latent heat.

Similarly, if heat is added to ice at 0°C it will melt and change phase (ice to water). The heat added does not increase the temperature but changes the phase. Thus, this is also latent heat.

The unit is the same as for heat i.e. the Joule.

The latent heat required to melt a solid is referred to as the “heat of fusion”.

The latent heat required to evaporate a liquid is called its “heat of vaporisation”.

Water has the same nature throughout and is therefore said to be in phase. The same applies to ice and water vapour.

Again, the three phases in which matter can exist are – solid, liquid and vapour or gas – and thus different changes of phase can occur which have different names.

Solid to liquid and liquid to solid.

The amount of heat required to melt and to freeze it are exactly the same.

Changing a liquid to a vapour (like boiling water) is called evaporation.

Changing a vapour to a liquid like the steam coming out of the kettle changing back to water on the wall) is called condensation.

Some solids (e.g. dry ice) change directly from a solid to a vapour. This process is called sublimation and the latent heat required is called “heat of sublimation”.

Some typical values of the aforementioned are:

Thank you for the question Stefan, I will go into this in more detail in the next issue.

Thank you for all your questions. Send your problems (and sometimes your creative solutions) to acra@netactive.co.za with ‘Solutions Page’ in the subject line. You may include pictures. 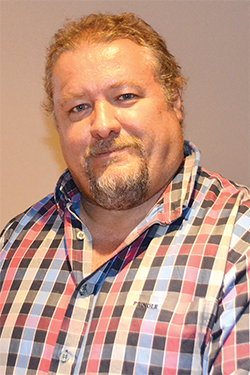 Grant Laidlaw is currently the owner of the Air Conditioning and Refrigeration Academy (ACRA) in Edenvale. He holds a Bachelor of Business Administration and an associate degree in educational administration. He has a National Technical Diploma and completed an apprenticeship with Transnet. He has dual-trades status: refrigeration and electrical. He has been involved with SAIRAC for over two decades and served on the Johannesburg committee as chairman and was also president between 2015 and 2018. Currently he is the SAIRAC national treasurer.