Large uncertainties in trends of energy demand under climate change 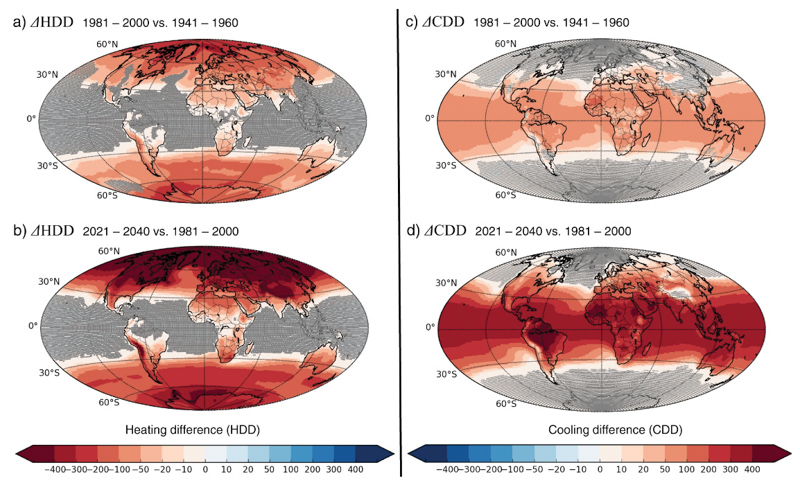 The energy demand for heating and cooling buildings is changing with global warming.

Using proxies of climate-driven energy demand based on the heating and cooling Degree-Days methodology applied to thirty global climate model simulations, we show that, overall continental areas, the climate-driven energy demand trends for heating and cooling were weak, changing by less than 10% from 1950 to 1990, but become stronger from 1990 to 2030, changing by more than 10%.

With the multi-model mean, the increasing trends in cooling energy demand are more pronounced than the decreasing trends in heating. The changes in cooling, however, are highly variable depending on individual simulations, ranging from a few to several hundred percent in most of the densely populated mid-latitude areas.

This work presents an example of the challenges that accompany future energy demand quantification as a result of the uncertainty in the projected climate.

In addition to long-term trends in these three components, there is a short-term variability in energy demand, and in related CO2 emissions, which is mostly linked to climate variability.

The amplitude of this diurnal cycle is large in dry areas and small in wet areas. The day-to-day variability in energy demand depends on temperature following a V-shape curve with a minimum related to human thermal comfort as well as other socio-economic and technological factors.

This minimum is found for a similar daily mean temperature around 16 °C for 35 countries in Europe. Therefore, a comprehensive analysis relating the trends in the projected temperature and its consequences on energy demand is possible.

The Degree-Days methodology is the historical method for estimating the heating and cooling energy demand of buildings (cf. Methods section). A key assumption of this method is that the average temperature of a day provides a good proxy for the human thermal discomfort, and thus of the daily energy demand.

In the context of climate change, the estimation of energy demand of buildings in the coming decades should include changes in climate-driven energy demand, which are expected to become increasingly important in the future. The use of climate projections for this purpose is thus pivotal. Future changes in the energy demand for heating and cooling buildings through the twenty-first century have been estimated using Degree-Days calculated with the temperature output from climate model simulations for the US and Europe individually.

A vast amount of literature investigates climate change impacts on future energy demand together with implications for the society in terms of energy system capacity, regulations and mitigation, adaptation, or socio-economic developments. These studies consider the complexity of the socio-economic and technological components, but the climatic component is overly simplified.

For instance, the use of Multi-Model Mean (MMM) climate projections or a single scenario of greenhouse-gas emissions neglects the full range of possible future temperatures. A recent global analysis of numerous factors involved in the energy demand predictions showed a weak agreement in these projections for hot and cold days. To go further, the future temperature being highly variable among climate projections, the uncertainties related to climate need to be quantified and included in estimates of future energy demand. A consistent global analysis of these uncertainties is still missing.

This new study focuses on proxies of the climate-driven energy demand for heating and cooling buildings and presents a global analysis of future trends together with a comprehensive analysis of uncertainties linked to temperature projections.