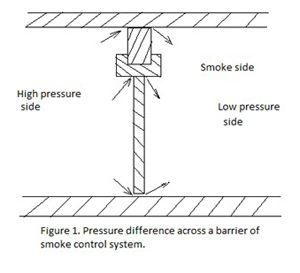 In the previous issue of RACA Journal, I discussed fire smoke in a building by considering service shafts and lift shafts being designed around the possibility of fire smoke stack effects. In this issue we look at barriers in the building structure.

Smoke control uses barriers in the building structure. The barriers are the building walls, floors and doors. The other barriers may be in the form of mechanical fans for building ventilation. The two basic principles of smoke control are the following, which will be looked in detail:

In multi-storey buildings lifts are used, and lift shafts may transfer smoke from the affected areas to other unaffected areas during a fire. Lifts may also be used as fire escape routes for fire technicians.

These shafts transport smoke during fires using buoyancy and expansion. To use lift shafts for smoke control, ventilation fans are used to pressurise the shafts during fires. The doors act as smoke barriers and, as can be seen from the above diagram, smoke will never enter the lift shafts so that lifts may be used by the smoke control technicians in all building levels to extinguish fires. 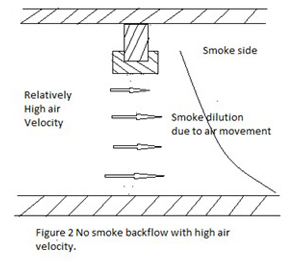 In building corridors, air flow velocity is used to prevent smoke from travelling in certain directions. The diagram below shows this concept in operation.

This principle makes evacuation of tenants much easier when the direction of smoke flow is known. Corridors of large buildings may be favourable for smoke acceleration, but if ventilation fans are designed and positioned properly, they can be safe passages for evacuating tenants from large buildings.