he COVID-19 pandemic has sparked a change in HVAC engineering, particularly in medical buildings. Hospitals for instance, were not originally designed to operate with numerous potentially infectious people walking through the doors. However, early in the pandemic, Aspen Medical constructed a 51-bed surge centre in just 37 days. Every bed was in a mechanically controlled isolation area with systems ventilating the air 12 to 15 times per hour. 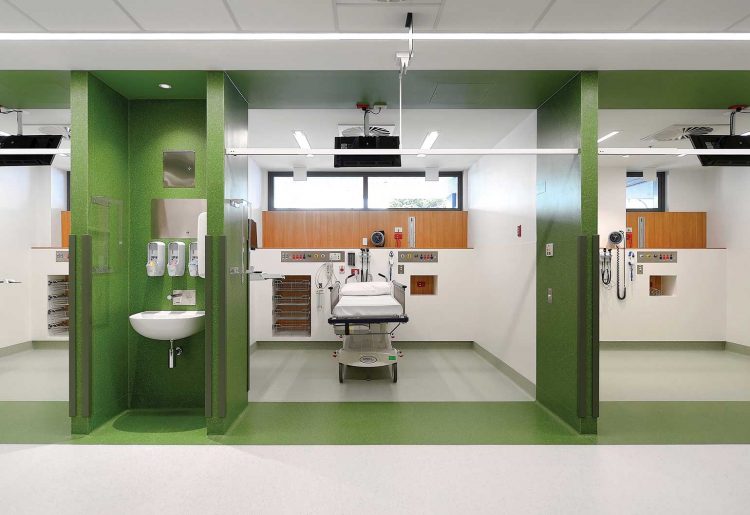 Over the pandemic’s two years, thinking around HVAC design, particularly in medical buildings, has been re-shaped dramatically.

“That has given much more weight to HVAC engineers, because without the right airflows, hospitals simply can’t deal with people who desperately need help,” Spies said.

And it’s not just about hospitals. One of Australia’s major outbreaks originated from quarantine hotels, where the corridors were used as returns for exhaust air from rooms.

“That’s okay normally, because you want clean air in hotel rooms,” Spies said. “But if you’re dealing with quarantined and potentially infectious people, you don’t want air leaking into the corridors. There’s also the issue of numerous spaces being served by one piece of ventilation equipment and air being recirculated.”

New HVAC design could involve smaller ventilation units and more of them, each serving a specific space. However, this presents challenges of energy efficiency and redundancy, Spies said.

“With some of the centralised systems, you can have backup for when maintenance is required or if there’s a fault,” he said. “But when you’ve got lots of different pieces of equipment, that’s not as possible.”

When she first went into lockdown, Engineers Australia fellow and chartered engineer Astrid Kauffman FIEAust CPEng, president of Engineers Australia’s Victoria division, began thinking about the health and safety of those in her apartment block. They ranged from young to elderly.

“I was reflecting on what we should be doing as a community, but it wasn’t clear to me what that was or where we should get advice,” Kauffman said.

She did what any good engineer would do and began searching for a solution. Contacting various experts, she quickly discovered there was no simple answer. Then, with input from many of those specialists, Kauffman wrote a paper to elicit feedback and inform Engineers Australia on its potential role to improve engineering practice for management of air in the built environment.

“We recently had our first roundtable meeting with a range of different organisations, including government agencies and fellow peak bodies such as the Australian Institute of Refrigeration, Air Conditioning and Heating and the Air Conditioning and Mechanical Contractors Association,” she said.

Some challenges and issues identified included:

“It’s the start of a conversation about how the broader professional community can work together, their interests and concerns and how engineers can add value,” Kaufman said.

That value, she said, includes the ways engineering advice is used by asset owners, who are often not engineers. Engineers create technical advice that needs to be usable by lay people to make decisions about HVAC. The relationship between engineers and the community as a trusted advisor is critical,” she said.

A practice of keeping 1.5 m away from others has been broadly adopted as a social distancing standard. What if, however, this figure is incorrect? At the Australian National Maritime Museum recently, the ARBS Education and Research Foundation asked researchers from the University of Sydney to conduct some fascinating tests. Their research used a thermal mannequin that breathed inert tracer gas that simulates airborne COVID-19 aerosol.

That experiment found, in a specific indoor environment and HVAC operation, that aerosol concentrations varied little within a six-metre radius of their release. Indoor settings with 100 per cent fresh air ventilation boasted significant improvements in contaminant dilution levels, and indoor settings with large volumes and high ceilings also help to reduce the concentration of aerosol contaminants.

For example, for an indoor dining setting, application of maximum fresh air ventilation resulted in the lowest “virus” concentrations, confirming the widespread belief that outdoor dining affords the safest conditions.

Present at the event was Brett Fairweather, director of It’s Engineered. “I felt very lucky to witness these tests,” Fairweather said. “They demonstrated clearly and visually the importance of dilution.”

In fact, Australian ventilation standards are built on the principle of dilution, he added.

Humans only require about 2.5 L per second of clean outdoor air to breathe, but Australian standards require additional dilution to displace particulates, odours and other specific contaminants.

The relevant research points to 9.7 L per second in most cases, but this is rounded to 10 for use in Australian standards.

The World Health Organisation’s Roadmap to improve and ensure good indoor ventilation in the context of COVID-19 pointed to a minimum of 10 L per second for many of the same enclosures prescribed in AS 1668.2, but also highlighted the importance of appropriate distribution and air patterns within spaces.

“And when further information emerges from further research, we’ll simply need to adjust those measures to match the new figures,” Fairweather said. “Many have asked me what’s going to change in the codes and the standards to address COVID. But actually, I haven’t yet seen anything to suggest the current requirements are increasing risk. We tend to find current requirements just aren’t being understood or implemented properly and many buildings aren’t being maintained to keep the systems doing what they’re supposed to do.”

That’s a vital point in the discussion, Fairweather said. Before looking at what needs to change, people need to finish doing what they’re supposed to have been doing all along.

“A lot of the criticism around this point is inadvertently highlighting the importance of involving engineers who understand that the key principle is dilution,” he said.

Kauffman agrees deeper involvement of HVAC engineers is the way of the future.

“If you crank up the air conditioning to get more airflow, you’re potentially increasing the cost, noise and emissions but probably improving aerosol dilution. You’re also impacting the thermal comfort of people in the space,” she said. “But this doesn’t mean we have to sacrifice one for the other. Engineers play an important role in developing an appropriate balance of these issues.”