A once in a lifetime opportunity for the HVAC industry.

We are really at a turning point this time. In the past few months, the European Union (EU) leaders have agreed on a comprehensive package of more than EUR1 800-billion to relaunch the continental economy. It combines the over EUR1 070-billion Multiannual Financial Framework (MFF) and a EUR750-billion recovery effort called Next Generation EU.

Leaders have also agreed that 30% of the total expenditure from the MFF and Next Generation EU would target climate-related projects, and in terms of timing, pre-financing would be paid to member states upon request in 2021, which means ‘today’. This is the greenest recovery plan the world has seen so far.

How will all this money be transferred to the real economy and consumers’ lives?

The major programme of Next Generation EU (named Recovery and Resilience Facility and accounting for 90% of the total amount), is made up of loans and grants distributed to EU member states, and in this case money will be given in light of green plans for “investments and reforms” in the applicant country. This budget will help transform the EU through its major policies, particularly the European Green Deal, the digital revolution and the resilience of national economies.

The European Green Deal consists of a set of measures that are related to several policy areas (herein is a summary), but at it’s heart, there is a challenge: to cut greenhouse gas emissions (GHG) by at least 55% by 2030, and thus the EU becoming the first climate-neutral continent (= net-zero GHG) in the world by 2050. Turning the continent’s climate neutrality from a political commitment into a legal obligation will be possible through the European Climate Law under discussion.

The HVACR industry is deeply involved in many of the policy areas affected by the European Green Deal and can significantly contribute to reaching the neutrality target.

If we now focus only on HVAC, we can mention at least two of the several possible contributions: enabling the replacement of fossil fuels from heating and cooling (i.e. decarbonisation and electrification) and accelerating the adoption of low or, even better, natural near-to-zero GWP gases into refrigerant circuits.

The adoption of residential heat pumps instead of gas boilers has been booming in the past years with double digit CAGR’s and reaching the record of 1.45 million pieces in 2019.

Even in the socially and economically devastating 2020, the heat pump market has shown enviable resilience, and expectations are even higher for the next few years, with the Heat Pump Energy Labelling Revision scheduled for 2021 and no new-built fossil-fuel installations allowed after 2030. This will see gas boilers phased out exactly on time for the 2050, the EU’s neutrality deadline. 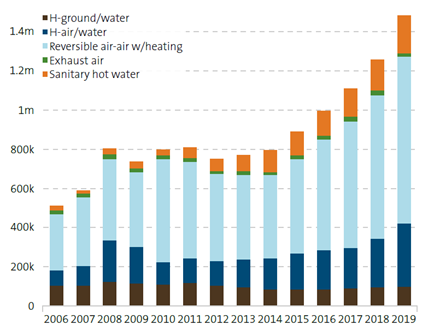 Industry is supporting this trend with technology already available in mass production, but also with a clear development path to meet the increasing requirements of the Energy Efficiency Directive and customers’ expectations in terms of comfort and financial benefits versus traditional gas boilers. To mention just a few products, solutions, services available for up-to-date heat pumps:

Variable speed as standard for single-compressor applications, which represent the majority in residential installations; in fact, “why should the unit run at maximum speed even when it is not needed?”

System design approach for space cooling and heating, domestic hot water, heat recovery ventilation (HRV) and energy storage units, to answer the question, “Why shouldn’t the heat generated by one unit be used by another in the same house?”

Remote connectivity, “Why should a heat pump not be connected to the cloud for preventive maintenance and constantly compared against other similar units for energy optimisation?”

Mini-energy grid solutions, “Can the heat pump talk to and exchange energy with the PV installation, EV charging station and battery storage?”

As far as the second major contribution from HVAC to climate neutrality is concerned, the refrigerants used, there are still significant great margins. The United Nations Framework Convention on Climate Change, declared that fluorinated greenhouse gases (F-gas) accounted for approximately 3% of overall GHG, expressed in tonnes CO₂ equivalent in the EU in 2017. 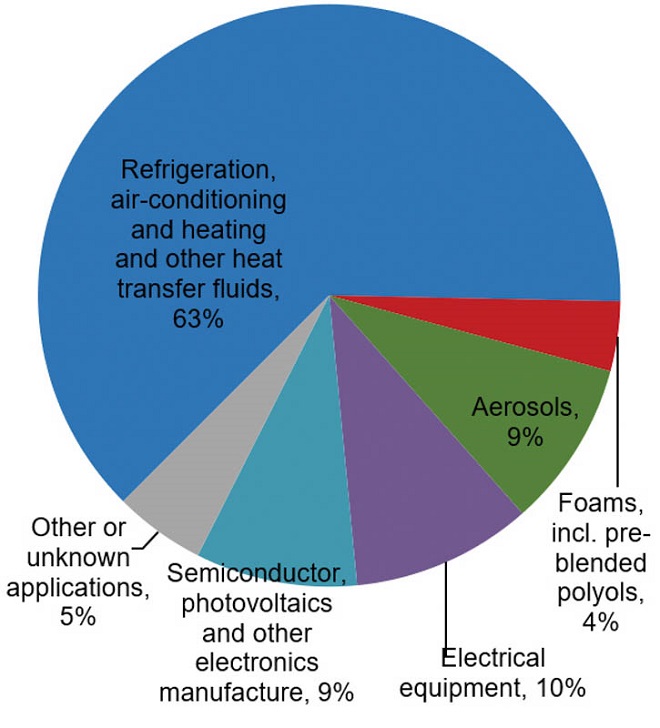 If we consider that according to the EEA (European Environmental Agency), HVACR accounts for 63% of this F-gas (figure below, taken from a preview of the EEA 2020 report on fluorinated gases by Arno Kaschl, policy officer at EU Commission – Chillventa 2020), it is clear how much influence the HVAC/R industry can have on this matter.

Thanks to enforcement of the F-gas Regulation, we have seen a falling impact of F-gases used in HVACR starting in 2017. Indeed, if we consider their use in terms of absolute values (image 3, graph on the left) and tonnes of CO₂ equivalent (graph on the right), we can see not only their decreasing GWP (global warming potential), but also an increasing contribution of natural refrigerants such as propane, CO₂ and ammonia.

Good job then? “Yes”, in terms of absolute value, “no” in terms of distribution of the effort. In fact, while low GWP gases and natural gases have now been significantly adopted in the refrigeration industry, driven by specific bans and the F-gas quota system, in HVAC we are not there yet, as the large majority of units are still operating with F-Gas refrigerants and we have limited gas bans.

Even though the following chart is based on 2012 data and not just in the EU, the use of HFCs in HVAC versus Refrigeration in terms of in CO₂ equivalent is evident. HFCs account for about 65% of F-gases.

If we also consider that the need for AC will increase three-fold by 2050 due to rising temperatures and a growing middle class, it’s clear that something can and must be done more specifically in the HVAC area.

From a legislative point of view, the F-gas Regulation review is expected in 2022, and the EIA (Energy International Agency) is urging the inclusion of a ban on HFCs in split-system air conditioners and promoting propane (R-290) as a viable alternative. The EIA estimates that in Europe, moving away from HFCs in split air-con from 2025 could result in cumulative savings of 62 million tonnes of CO₂ equivalent by 2050, that is, the same amount as the annual emissions from over 500 000 cars.

In commercial HVAC there are no specific bans yet, but industry is seeing the introduction of units with lower GWP gases compared to the previous standard R-410A (GWP = 2088, no flammability): mainly R-32 (GWP = 677, A2L flammability according to ASHRAE Standard 34, no pin-to-pin replacement with R-410A), but also R-452B/R-454B (GWP = 698/466, A2L flammability, pin-to-pin replacement with R-410A) and other even lower GWP HFC blends. The amount of R-1234yf contained in some of these blends puts them outside of a green vision, as it breaks down in the atmosphere creating high levels of trifluoroacetic acid (TFA), which can be very harmful to human health and the environment. In fact, TFA is considered a persistent toxic pollutant, as it accumulates in the hydrosphere and affects germination and plant growth.

To leave behind this situation of uncertainty and transitory solutions, the development and release of solutions based on natural refrigerants propane (R-290) and CO₂ (R-744) that have near-to-zero GWP has seen a strong increase in Europe in the last year, in residential, commercial and industrial HVAC. I expect there to be a significant acceleration.

In residential HVAC there are already units available on the shelf and that are using either propane or CO₂. Propane is mainly used in outdoor units for space cooling & heating, there are now several manufacturers in Europe (mainly based in Germany, Poland, Italy, Nordics, UK but also other EU countries) that are finalising or launching their products through their distribution channels. Of course, they had to learn how to manage the flammability of this A3 gas, also supported by expert suppliers capable to providing components, solutions and above all know-how. 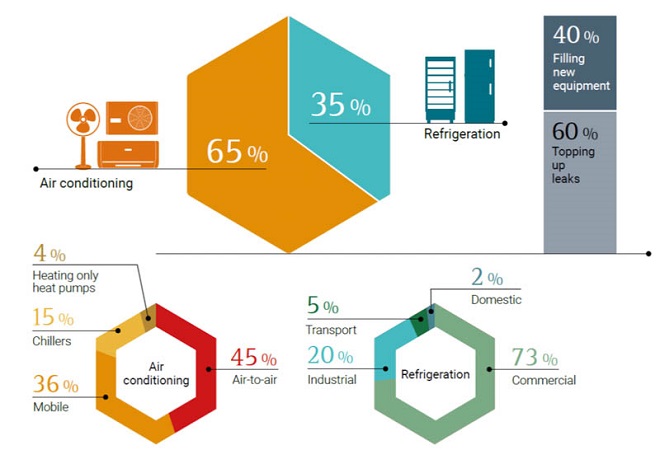 From heat exchangers to compressors, valves and so on, most of the components inside the unit have to be reconsidered. The result is that effective solutions have been identified and made applicable for the typical mass production of HP manufacturers involving thousands of units per year.

That is true also for CO₂ technology, which is more suitable for domestic hot water HP, and has already been proven to work well in Japan (EcoCute HP) but needs adaptations to perform well in Europe. The technology is not trivial, as it requires higher working pressures than HFCs and several refrigerant circuit layouts are being examined.

The challenge there is also to invest in setting up the service and maintenance networks for CO₂ heat pumps. As for propane, for CO₂ too know-how is the ‘service’ that HVAC manufacturers most request from suppliers, and those that have been operating in the refrigeration industry, where CO₂ has been adopted for several years, are successfully using their strategic advantage.

We should not forget the many CO₂ units partially released and partially under development for MACs in both trains and new electric buses. In the latter case, the vehicle’s MAC units also need to provide heating, as there is no internal combustion engine, thus the vehicles are equipped with cooling and heating units (in other words a CO₂ HP). We are already there!

In commercial HVAC, together with the new units proposed with R-32 and R-452B/R-454B, we are already seeing in Europe some examples of commercial chillers, HPs and rooftops using propane. The main limitation until now, together with the safety concerns about the amount of A3-flammable propane needed, has been the partial availability of components suitable for this gas, as components were initially designed for smaller units. Industry is moving quickly and is almost ready to flood market with properly-sized components, so it is no secret that with current limited numbers the cost of production of a propane rooftop is currently just 10% higher than a standard R-407C with the same efficiency. It is easy to imagine how easily the two costs will be aligned as soon as supply chain starts mass production.

In these two articles, we have seen a couple of key examples of how the HVAC industry can contribute to the EU’s 2050 neutrality target by working on the electrification of heating and cooling and by fostering deployment of solutions based on natural refrigerants with low or even near-to-zero GWP.

Overall, it seems that all European stakeholders are definitely accelerating to make it happen:

End users, as nothing can happen without them (well, “us”) as their awareness of green topics has never been so high. They will no longer be asked to pay more for a green HVAC unit and they will simply ask for it, otherwise they won’t buy it.

This is a once-in-a-lifetime opportunity for the HVACR industry, and this is really happening now.