Home » Chillers: Over a hundred years in the making

Chillers: Over a hundred years in the making 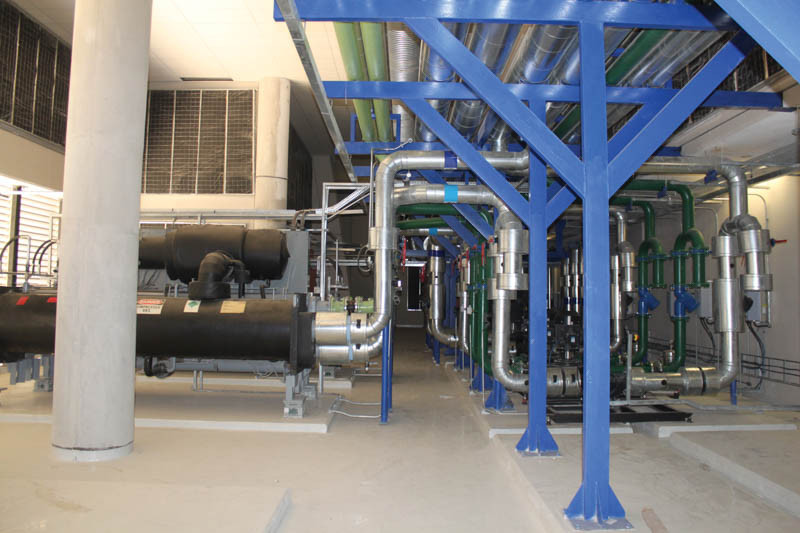 Most processes today involving mechanical elements generate heat as a by-product, and if not removed from the system will result in unfavourable conditions.

No matter if you are looking at a processing plant, manufacturing facility, laboratory, or the cooling in a building, a version of the chiller would be a suitable solution in managing the various ways heat is generated that causes, amongst others, a negative effect on efficiency, comfort in the case of occupied spaces, and can ultimately cause varying degrees of system failure.

Chiller technology itself is by no means anything new and the first patented centrifugal water chiller dates back to 1921. With the development, trials and errors involved in getting a new system to a patent stage, it means that the product has stood the test of time; having already remained relevant for over a century.

“Chillers are classified by the way in which they reject heat. Heat rejection is necessary in order to satisfy the laws of ‘give and take’ (or energy conservation). Since heat is ‘taken’ from the building, space, or process that is being cooled, it must be ‘given’ to the outside air. The emphasis here is on heat, not on air. We don’t take the air from the building and dump it outside. Although that could provide some cooling, that is not the principle behind a refrigeration/cooling unit. All refrigeration units work on the same basic principle (refrigeration cycle), from a water chiller to basic air conditioner or even a fridge. Where and how the heat is dumped and how the refrigeration circuit is driven is where the differences lie,” says Russell Hattingh, Pr.Eng. at BBE Consulting.

A hybrid chiller installed at a filling station in Kwazulu-Natal. Photo by Trane/Service First 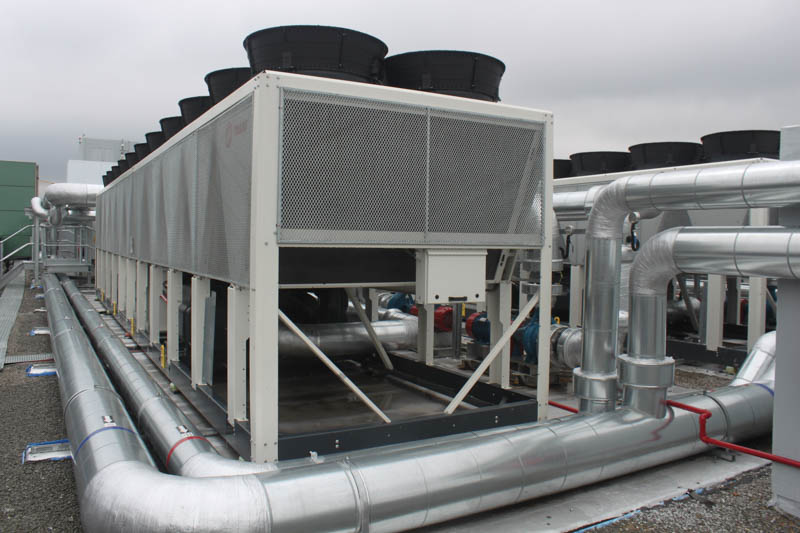 Some pros and cons of each chiller type:

“In South Africa, electrical outages are common, but can be overcome with generators. Water supply issues, although less common, are an occurrence some end users have to factor in to ensure 24-hour operability. Water cannot be generated on site, so air-cooled chillers may be supplied as back ups for critical areas (such as data centres and broadcasting facilities). Redundancy, however, comes at a price – the cost of downtime has to be weighed up against the additional capital-spend required,” Hattingh says.

Du Plessis adds, “There are naturally various methods of hybridisation that can be considered to increase efficiency, but these must always be viewed within context. An example includes heat recovery from chillers used as heat source for domestic hot water to minimise energy, which will typically only be found feasible in applications where there is a constant hot water demand, such as hotels.”

“Heating of water is achieved through the recovery of heat from the compression cycle (partial and total recovery percentages), and a mix of cooling only chillers, heat pumps and/or multipurpose units are other ways hybrid type systems can be created,”, says Roelofse.

Changes to the chiller landscape

In recent years we have seen two big drivers shaping the chiller landscape. Water and refrigerants. Many end users have opted for air-cooled chillers to ensure uptime and eliminate the risk of having a variable water supply (consider the facility owners in the Western Cape during their water shortage). Uptime comes at the price of higher running costs but when having no water, this means not running your facility so the decision is more easily swayed.

“Changing environmental regulations have also driven a change in the chiller landscape. South Africa was a signee of the Kigali amendment of the Montreal Protocol, and as such has committed to phasing down the use of HFC refrigerants. The phase-down in South Africa is not particularly aggressive, but since the chiller OEMs are largely located in North America and Europe we are seeing that the product offering is changing to suit the global market needs. As a result chillers using HFO refrigerants are gaining traction and we will continue to see more and more owners opting for these chillers as the phase down continues”, Hattingh notes.

“There are many pro’s and cons with any HVAC installation type, and it all ultimately depends on the client or project’s specific requirements, priorities of cost, operations, flexibility and efficiency. In general, economy of scale applied to larger installations tends to favour chilled water systems in lieu of modular VRF or DX type systems, both in terms of cost, operation and complexity”, du Plessis adds.

Roelofse notes, “We are seeing that there is a definite swing towards central plant systems again, combining the benefits of cooling only, heat recovery, heat pumps and multipurpose units within an installation. 10 to 15 years ago, central plants were the answer, but then something like VRV/VRF and certain other systems came into play and became the ‘in-technology’. This resulted in less central plants being chosen in favour of a different type of solution. Now, as chillers have advanced where you can utilise heat recovery and implement or include all sorts of other technology mixes, it’s swinging back to central plants again, specifically in the bigger applications – medium and large buildings. The changes to the chiller landscape as Russell says is primarly pushed by the development of lower GWP refrigerant (and pressed by government legislation), but also there is a much higher efficiency of all components directly linked to chillers (like compressors and electric motors) and this is driven in turn by energy-related product (ErP) regulations. This is an international standard relating to how all energy consuming products perform.”

Jaco Smal, sales, service and marketing director at AHI Carrier says, ”technology advancements in this area also must take into account the services and products that suppliers create to enhance the customer’s experience. These are things like leveraging the power of wireless technologies, data analytics, cloud computing, artificial intelligence, and the internet of things (IoT). These are becoming more important differentiators which give some suppliers a competitive advantage. Utilising remote diagnostics and troubleshooting, our team of experts can for example, prevent breakdowns and ensure optimal performance of the clients HVAC systems. With ‘smart’ technology and IoT connectivity, clients can now benefit from the advanced analytics that offer improved visibility of their operations, reduce incidents of failure, increase uptime, better their equipment performance and efficiency, and reduce operating and maintenance costs. All of these being the biggest portions of technology advancement and efficiency.”

Europe has also played a significant role in promoting chiller efficiency as their regulations mandate minimum equipment efficiencies. OEMs (either based in Europe or wanting to punt their wares there) are constantly being pushed to improve efficiency levels and these changes come about in various forms.

“Microchannel condensers, falling film evaporators and magnetic and ceramic bearing compressors have certainly made a significant difference to the efficiency of today’s chillers. Developments in controls (both on-board and for plant management) allows designers significant flexibility when considering the optimum configuration of chillers for a particular application. The data centre industry is certainly challenging chiller OEMs to find ways to reduce operating costs and many OEMs have risen to the challenge making equipment that can run with much higher-leaving chilled water temperatures”, says Hattingh. “We’re going through an exciting time at the moment. The chiller industry is in some flux as the refrigerant landscape is changing. The refrigerant changes bring about significant changes to the way in which companies then make their equipment. A refrigerant is not simply changed without significantly altering the hardware. Many OEMs are therefore experimenting with lower GWP HFCs while they work out which HFO they want to use, and they adapt their equipment to suit. Change is however something that the chiller industry is accustomed to so expect to see equipment brochures with new refrigerants and new installation procedures and requirements.” 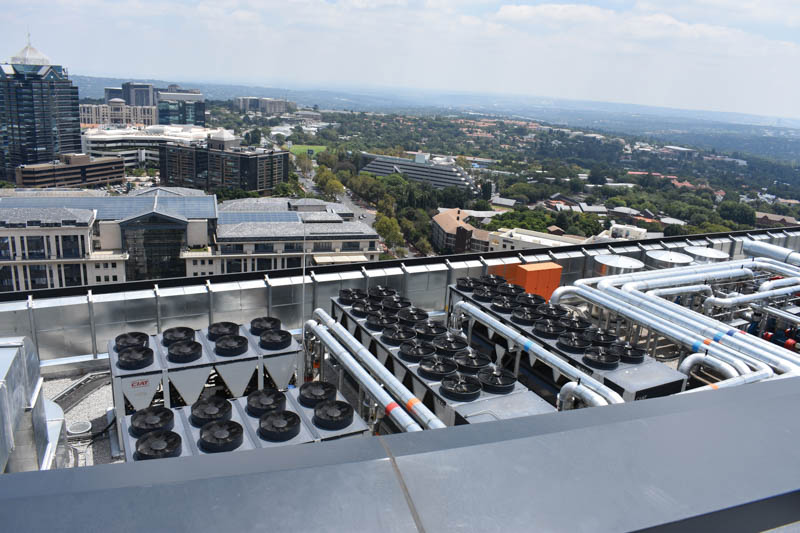 “There are again various technolgies that can be considered to increase efficiency. However, this must be considered in conjunction with the context of project-specific details such as cost, complexity and size requirements. For example, an air-cooled chiller can utilise dry-cooling coil sections to use low ambient conditions directly and minimise the energy required from the compressor for cooling. However, the degree to which this is effective will depend on operating chilled water temperature and the ambient conditions. It might only be a feasible option if relatively high chilled water temperatures are acceptable and if ambient conditions are suitable at a large percentage of running hours,” adds du Plessis.

“Some of the technology where we see development related to chiller are the EC-technology on condenser fan motors, inverter technology on compressors, connectivity of units through improved controls and the cloud based monitoring of equipment. Also worth noting is that, historically, natural refrigerants like CO₂, ammonia and propane have been limited to big installations and specific process cooling, but natural refrigerants are now becoming more a part of the commercial side of the HVAC sector”, notes Roelofse.