Home » A basic introduction to fin and tube designs – Part 1

A basic introduction to fin and tube designs – Part 1

“Heat exchangers (HEs) transfer heat from one fluid to another without the fluids coming in direct contact” – (ASHRAE, 2008, Chapter47). An exchange of heat energy taking place between at least two fluids. A fluid of course being a vapour or a liquid or a combination of both.

In the low-pressure portion of any system, the heat energy from an enclosed environment is absorbed by the refrigerant on the inside of the evaporator. The refrigerant changing phase, in this case, from a HP liquid to a vapour within the enclosed HP side of the system.

Coil with no finned surface area. Photo by Thermocoil

Another important rule to keep in mind is that heat energy is transferred or flows from one fluid to another when there is a difference in temperature between the two. Heat energy will flow from warm to cold and not the other way around and that is very much applies in each heat exchanger as well.

The ideal exchange of heat takes place when the two fluids are perfectly counter flow. This applies to any heat exchanger type.

With two fluids flowing through a heat exchanger, the rate of heat transfer (duty) could be calculated as:

Discrepancies between the theoretical duty and the actual duty is often due the two fluids not being perfectly counter flow. A perfect counter flow is not always possible with a fin and tube coil.

The type of materials used is, for the greater part, dependant on the environment that the HE will be functioning in. How warm or how aggressive might the mediums experience that form part of the system.

<heading2> Fin and tube heat exchanger in the HVAC&R industry

Early heat exchangers were commonly made up of tubes alone. This limited the surface area and potential heat transfer. Heat Exchangers (HE) are essential components used in every cooling, heating, air conditioning and refrigeration system.

Heat transfer was “extended” with the use/addition of fins. The transfer rate (W) in DX applications could be defined as follows. (Stoeker, 1976, p163):

he overall heat transfer coefficient, being a product of the materials used and their respective wall thicknesses. With reduction in the difference in temperature between tf and tr the surface area (A) would need to be bigger in order to achieve the same potential heat transfer.

There is a wide variety of HE types on offer with new developments contributing to the options to consider in specific applications. A very commonly used type of HEs would be the fin and tube type. There are various reasons for this trend. One of the most obvious would be the fact that volumes of air are drawn across the HE, in most cases, to offer the cooling effect or to reject the heat from a functioning system (in the case of a air cooled condenser).

The air across the fin and tube coil is being cooled or provide cooling.

“Why make condensers air cooled?” This is a question I have received a number of times and I believe the best answer is simply that the ambient air volumes you have to make use of are in abundant supply and “free of charge”. In the case of an air-cooled condenser the ambient air drawn into the unit would gain some of the heat energy on the inside of the coil tubes as it comes into contact with the coil tubes and fins.

Due to the relative ease of manufacturing fin and tube designs, these are used in a variety of HVACandR applications. Not limited to these of course, but these would be the most commonly found in operation. 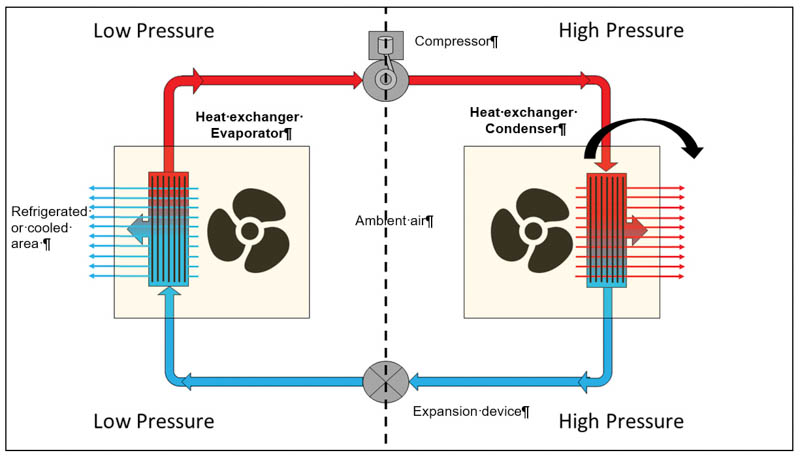 Continued in the next issue of the RACA Journal.